I've finally managed to finish this painting of my lovely orchids
24/04/2018
I started this painting in June 2017, and due to my extremely busy schedule was unable to finish it until last week! This is taken from my kitchen windowsill, the view I have whilst I wash up! My orchids sit there proudly, bursting into glorious bloom every couple of months, and I also look fondly at the postcard of Braque's 'Bird, Blue and Grey' which I have had since visiting an exhibition during my days as an A-level art student. Alongside that is a the hand cream I keep nearby but in reality my windowsill is much longer than depicted here - I decided not to include the whole windowsill in order to make the composition more compact and focused.
For this painting I was looking to create an impression rather than a tightly realistic rendition and was keen to experiment with dripping watercolours and loose washes, working with a fresh and spontaneous approach, hence the rather rough initial stages. This is quite risky with an unforgiving medium like watercolour, and it meant I was relying quite heavily on the white gouache at the later stages. I regretted somewhat at that point not having the brightness of the paper for the highlights, but after all this was a sacrifice I was happy to make in order to work in this loose way with watercolour.
I took some photos as I worked: 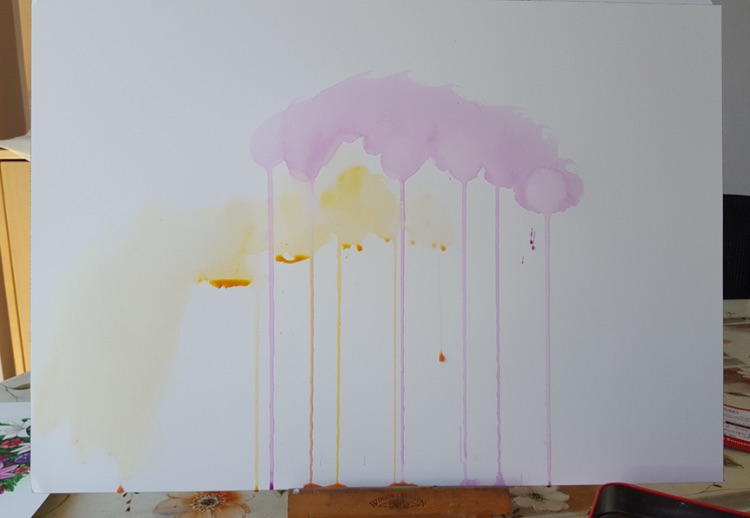 I was primarily interested in the lovely arc of the pink orchids over the yellow, and so began with that, making the washes particularly watery to create the drips 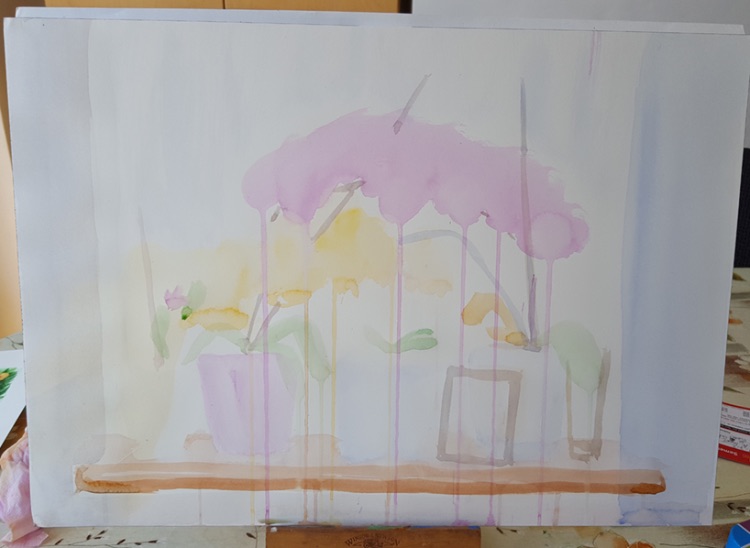 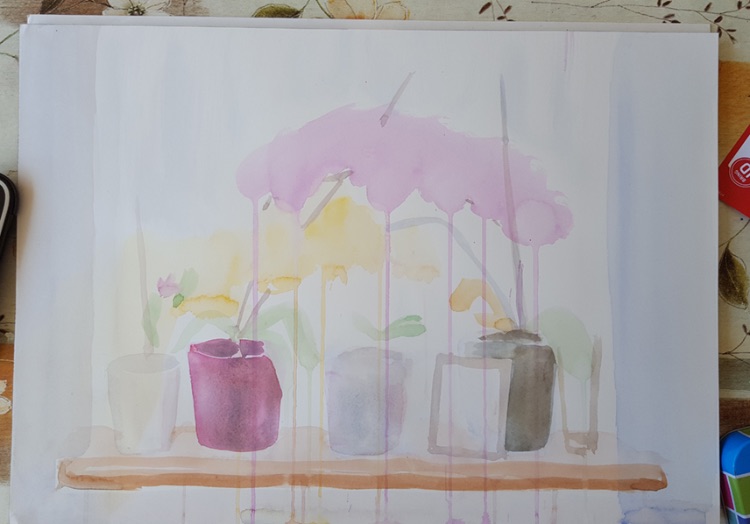 I began strengthening the colours 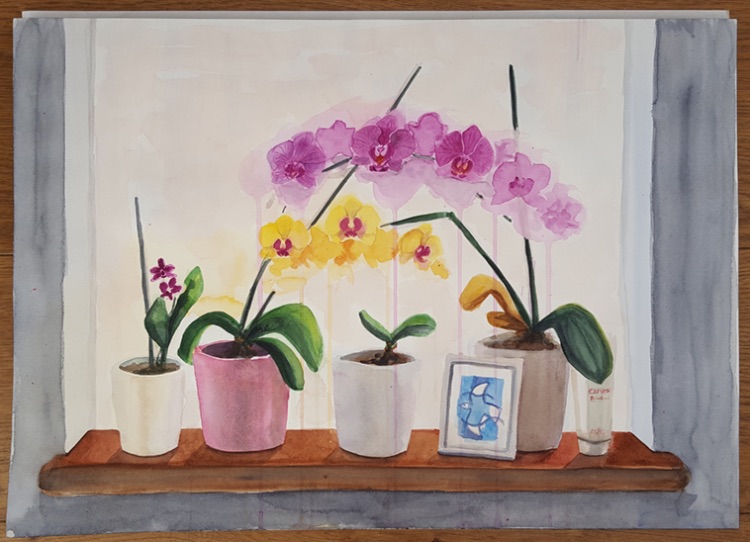 I continued strengthening the colours and tone, and added detail on the orchids 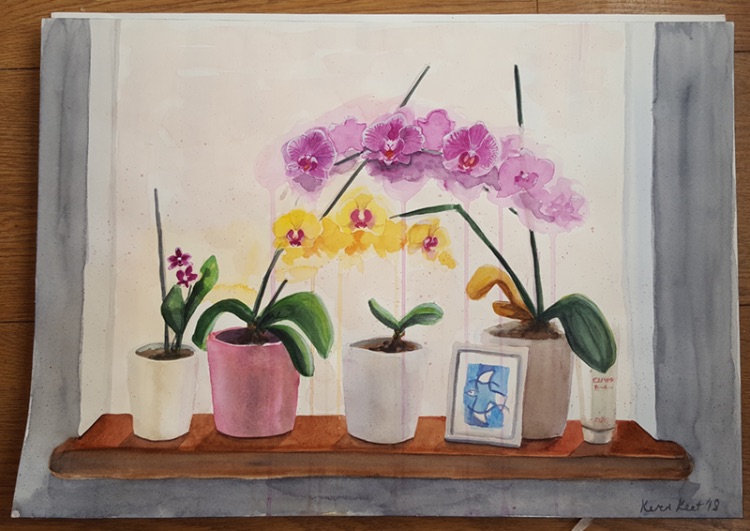 I used gouache to pick out the highlights on the orchids and I darkened some of the tones around them to create emphasis. I added some splattering around the objects to enhance the sense of energy. At this stage I thought I was finished but when I came back to the painting at a later date I decided the pots needed more definition and stronger contrast. I also tightened up some of the drawing, added stronger tone to the leaves and stalks and defined the frame more. I darkened the cast shadows of the pots as well as the shadow on the underside of the ledge. 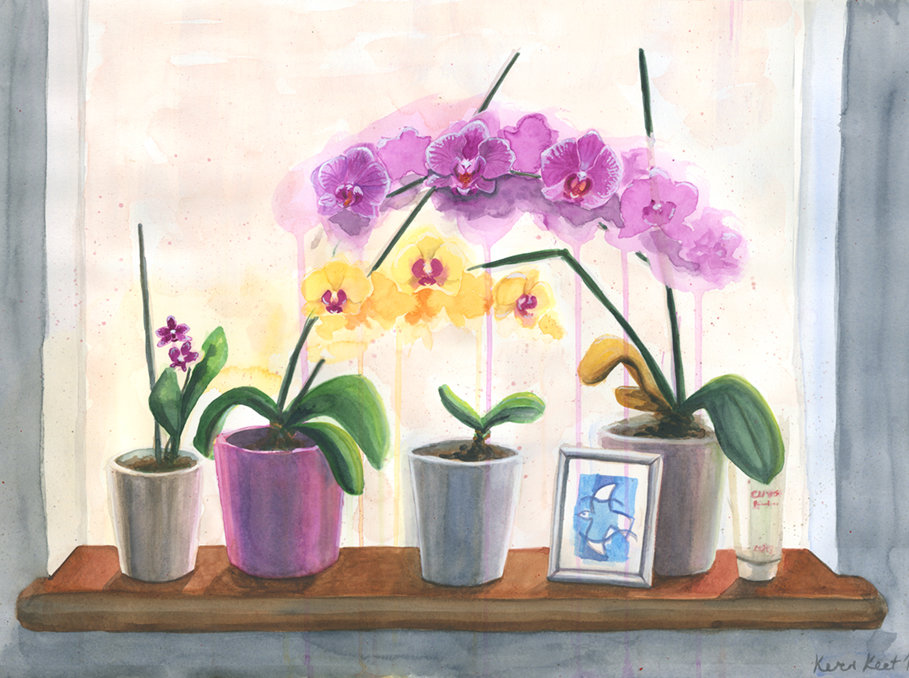